When the Health Information Technology for Economic and Clinical Health (HITECH) Act was signed into law in 2009, the stimulus package’s key goal was encouraging healthcare providers to trade in their pen-and-paper notes in favor of online Electronic Health Records (EHRs).

In the years since, the shift from manila folder–based patient records to cloud-based EHRs has been sweeping.

By 2017, nine out of 10 office-based physicians had adopted an EHR platform, as had 99 percent of large hospitals (defined as those hospitals with more than 300 beds)—plus 93 percent of small and rural hospitals—across the U.S., according to the Office of the National Coordinator for Health Information Technology. [statistic link: https://bit.ly/3d5vvlZ]

The many advantages of EHRs, according to proponents, include storage ease, streamlined sharing among a patient’s various medical providers, the ability to send e-prescriptions, and increased access for patients to their own health records.

However, a growing number of national surveys suggest that not all physicians are pleased with the usability of their current EHR platform.

The Harris Poll conducted a 2018 survey of more than 500 primary-care physicians (PCPs) on behalf of Stanford Medicine and found that while the majority of respondents felt EHRs had generally improved their patient care, 40 percent of participating PCPs saw more challenges than benefits to EHRs.

Further, 59 percent of survey respondents—including many physicians who acknowledged the overall value of EHRs—voiced a concern that the platforms are in need of a “complete overhaul” to improve their ease of use.

This sentiment was echoed in a Yale-led study published in the March 2020 Mayo Clinic Proceedings, which found that a cross-sectional survey of U.S. physicians—representing all specialty disciplines—gave EHRs a system-usability scale (SUS) grade of “F.” This was in contrast to higher SUS scores for other modern technology platforms, including Google (score of “A”); Amazon (“B”); and Microsoft Word, DVRs, and GPS (“C”).

The study’s authors found a statistically significant link between poor EHR usability and physician burnout, noting that previous studies have shown that physicians now spend an average of one to two hours on EHRs for every hour spent in direct contact with patients.

INFORMATION OVERLOAD
David McClellan, MD, FACEP, an emergency-medicine physician at Providence Sacred Heart Medical Center in Spokane, Washington, agreed that navigating a patient’s full medical history via an EHR can be challenging—especially when treatment decisions must be made quickly, as is typically the case in the emergency department.

“One of the banes of our existence in emergency medicine is that electronic medical records have a huge capability for historic information,” McClellan says. “But the information I need to take care of a patient well—balancing the need for expeditious decision-making and expeditious interventions—can be very difficult to pull out of the electronic medical record, because there is so much in it.”

McClellan observes that a given patient’s EHR may have pages upon pages of entries in the “Notes” tab for a single calendar year alone. Often, he says, these describe past status updates, such as “returned patient’s call,” which aren’t essential information for treating their current health situation.

“Sorting through all that to find the notes that summarize the patient’s history is very time-consuming and somewhat difficult, because you never know where the meat of the matter will occur,” McClellan says.

Further, he says, at times the EHRs may present patient health status as a jumble of line-item entries, without “true prioritization of key information,” meaning that pertinent patient information—such as the results of a stress test four months prior—may get lost in the shuffle.

Even distilling from among legitimate health details in EHRs in order to identify data that pertain to the patient’s immediate medical situation can be tricky, especially in a fast-paced ED environment.

“If somebody comes in for abdominal pain, I don’t really need to know about their neurologic history or their musculoskeletal history,” McClellan says. In that situation, “I only predominantly need to know what their previous cardiac history and gastrointestinal history is, along with a general sense of whether they’re somebody who comes in frequently or somebody who hardly ever goes to see the doctor.”

A TIERED APPROACH TO INFORMATION GATHERING
Essentially, McClellan adopts a three-tier approach to health-information gathering. The primary data source, in his thinking, should usually be the patients themselves. By asking key face-to-face questions about patients’ medical history and what’s brought them in to the ED, McClellan gets quick and important insights into their presenting medical condition.

Rather than trying to navigate through a patient’s potentially dense full EHR, McClellan generally then scans his patients’ summation document—typically a two-page printout that provides key details about the reason for their visit, their current medications and known allergies, a brief medical and surgical history, and current vital signs. This document serves as a second line of information, able to verify and expand on the patient’s self-reporting. Finally—when necessary—McClellan refers to the full EHR to find pertinent lab results, specialist's-visit notes, or other information relevant to potential ED interventions he may order.

Complicating the entire process, McClellan says, is the fact that EHRs across various providers and platforms don’t always interface well. Furthermore, different providers tend to categorize information differently within the record—sometimes key information may be found in the patient’s “Notes” section, while other records might instead put similar information under “Imaging” or “Cardiology,” as appropriate.

This lack of standardization can significantly impede efficient EHR navigation, placing Emergency Medicine (EM) doctors in particular—thanks to the fast-paced nature of their practice—in the unenviable position of experiencing information overload.

When asked whether he feels that the advantages of EHRs outweigh their challenges, McClellan says, “I’m probably in the minority on this, but I would come down on the slight negative side.”

LIABILITY CONSIDERATIONS
But what are the legal ramifications—if any—of an EM physician admitting that, when seconds matter, it may be impossible to scan a patient’s complete EHR before devising a treatment plan?

When it comes to liability, “It really is a matter of what the standard of care is in that physician’s profession, in terms of what they should be looking at in the EHR,” explains Miranda Aye, JD, a partner with Seattle law firm Johnson, Graffe, Keay, Moniz & Wick, who focuses on medical-malpractice defense cases.

“EM doctors typically wouldn’t be going back into all the primary-care notes and looking at extensive records,” Aye says. “That wouldn’t typically be part of their practice.” Therefore, failing to review the entire EHR would not, generally speaking, be reason enough to find an EM physician guilty of medical malpractice.

When doctors face a potential medical-negligence claim, their actions and inactions are weighed in legal proceedings against “what a reasonably prudent physician in that same field would do in the same or similar circumstances, with what was known at that time,” according to Aye. Thus, the standard of care for reviewing a patient’s EHR in emergency medicine may be different from what’s expected of a primary-care physician or specialist, both of whom work in less time-sensitive environments.

To illustrate, Aye shares an anecdote about an EM physician she defended, who was named as part of a wrongful-death case for prescribing Naproxen to an elderly patient who had come to the ED after a fall—failing to note from her full EHR that the patient had chronic kidney disease. Patients with decreased kidney function are typically advised to avoid high doses of NSAIDs like Naproxen; the patient, who had signed a do-not resuscitate order, experienced acute kidney failure after taking the pain reliever, and later died.

Though the EM physician spoke with both the elderly patient and her daughter during her visit, neither mentioned the patient’s pre-existing kidney condition. The EM physician failed to see an alert about the condition in the patient’s EHR, because it was under a tab named “Problem List” that is sometimes used by primary-care physicians, but is typically not comprehensively reviewed—depending on presenting complaint—in emergency medicine.

“The problem was, this EM physician didn’t even know where to find the Problem List in that particular EHR,” Aye says. “It’s a tool that primary-care doctors typically use. EM doctors would usually review the Past Medical Information. The information wasn’t in both places, in this case.”

The physician won the case and was exonerated, thanks in part to the testimony of other EM physicians brought in as defense witnesses. They agreed that the “Problem List” tab is not something they would typically consult in an EHR, particularly one they were not used to. Further, they agreed that it was beyond the scope of an EM standard of care to expect a physician to discern a patient’s kidney condition on the basis of other historical lab data not in evidence with the visit.

Still, Aye advises that her clients not make avoiding litigation the driving factor behind how they practice medicine—when it comes to how best to review patient EHRs, or anything else.

“At the end of the day, the overriding principle and focus has to be on giving good patient care,” she says. 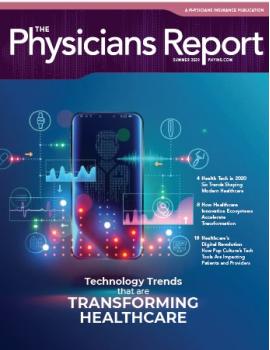 TECHNOLOGY TRENDS THAT ARE TRANSFORMING HEALTHCARE

Over the past decades, clinical science and medicine have brought an explosion of knowledge, unprecedented ability to diagnose and predict certain diseases, improved management of previously fatal conditions, and groundbreaking innovation in precision therapies. As research and development continues, it will be critical to foster collaboration between stakeholders so physicians and health systems will be supportive of the solutions and so we can build a healthcare system that works for everyone.