Only six months into my tenure as nurse manager, a sentinel event occurred that directly linked bullying behaviors to medical errors. On morning rounds, I was informed that a patient, found with an oxygen saturation of 52 percent, had been taken to the ICU. An MRI showed anoxic changes of the brain that were so significant, the physician was concerned his patient would not return to baseline. Even on a full re-breather mask, the patient could not converse normally. I took the Patient Controlled Analgesia (PCA) machine into my office and opened it up to find that the machine had been mistakenly programmed for morphine instead of Dilaudid. The patient’s decreased saturation was a direct result of his or her receiving more than 10 times the normal dose of narcotics.

Just then the door opened, and the nurse who was responsible for the patient came into my office. Before bursting into tears, she mumbled something under her breath. After reviewing the narcotic administration policy and debriefing her shift, I finally asked, “What did you say when you first came into my office? It sounded like ‘I shouldn’t have let them get to me.’”

Immediately the young nurse looked downward at the floor as she told her story:

I was about seven or eight minutes late for my shift last night. When I came around the corner of the nurses’ station, a group of nurses who had been talking suddenly stopped when they saw me. I don’t mean to be paranoid, but the conversation never picked up again. I went into the ladies’ room—you can hear from there, you know. Ellie said, “She’ll never make a good nurse, will she?” Then someone else, whose voice I didn’t recognize, said, “She just doesn’t have what it takes, does she?” I let those words destroy me. This is all my fault.

No amount of counseling could console her. Six weeks later she transferred off the unit to the very first position in the hospital. Was this an isolated event, or a trend? As a manager, I realized that if I didn’t change the conditions under which this event happened, there was a strong possibility it could recur. I understood clearly that my patients would never be safe until the nurses themselves were safe. I also knew that my role as a nurse leader must expand to accept the responsibility for creating and monitoring the atmosphere in which my nurses worked. What were those systemic conditions?

Horizontal hostility is defined as a consistent pattern of behavior designed to control, diminish, or devalue a peer (or

group) that creates a risk to health or safety. Some specific examples include:

The current system is perfectly designed to hide the relationship between bullying and medical errors, because both bullying and horizontal hostility create feelings of shame in all humans, regardless of their level of education. Neither physicians nor nurses report them because, often, their perception is that “there must be something wrong with me.” The deepseated emotion of shame keeps the very behaviors we need to address traveling just under our cultural radar—like an undertow, invisible and strong, taking our profession way off-course.

Despite the data, leadership in health care (from the front lines to executive level) has often fallen short of creating the team environment proven to provide a safe environment, and it has not heeded the critical call for leveling power dynamics.

A recent meta-analysis of all articles published on patient safety showed that a patient-safety culture possesses seven distinct subcultures. The first one is leadership. This is where we commonly fail. Leaders do not perceive their own cultural norms because they themselves are immersed in them everyday. Therefore, they also do not dedicate the necessary funds and resources to change the culture, and a few disruptive health-care workers may continue to destroy trust. Leaders may perceive relationship issues as “soft stuff” or unworthy of budget allocation, so education in this area is slim to none.

Making harm more visible increases trust, which is the fundamental characteristic of a team. But damage from medical errors is often driven underground in the current culture because of shame and a litigious society. A longstanding cultural meme says, “A good nurse or doctor does not make mistakes.” Yet our solutions for eliminating errors do not even begin to address these powerful longstanding cultural norms. Both nursingand medical-school curricula have failed to abolish this established myth. For example, I was speaking on creating a just culture to a group of third-year medical students, and asked, “When was the last time you did something wrong?” And a voice from the back of the room called out, “When was the last time I did something right?” We immediately stopped the presentation and discovered that the entire class felt exactly the same way. As long as we continue to beat up residents and nurses and deliver their education in silos—so long as nurses and physicians continue to feel ashamed of imperfection and hide their medical mistakes—nothing will change.

Because of a culture of blame and shame, medical errors are underreported and hidden within the system. There is no universal system for reporting errors or a way for hospitals to be immediately notified of an error to ensure that it does not happen again.

It is also well known that communication is the number-one cause of all sentinel events. A recent study of more than 4,000 health-care workers revealed that nurses were afraid to speak up because of fear of retaliation, fear of making the situation worse, or fear of isolation from the group. Health care breeds a fear-based culture, and strong leadership over an extended period is necessary in order to change a culture. However, due to a focus on financial survival in a time of great change, the attention of health-care leaders is constantly diverted to the bottom line, and the consistency needed to change the current culture has commonly been sidetracked.

Dr. Avedis Donabedian, famous for his work on the Seven Pillars and Eleven Buttresses of Quality, points out that structure dictates process that produces outcomes. If we work backwards from the negative outcomes (medical errors), we can identify the underlying processes (a culture of hostility and bullying, maintained by ineffective leadership and poor communication skills) and address the structural elements that create medication errors (business hierarchy).

Hostility thrives in a typical hospital hierarchy.It’s all about power. So how do you prevent medical errors? By disseminating power and forming a team with the core values of safe patient-centric care. Leaders must accept the challenge and personal responsibility for shifting power from a hierarchy to a tribe. What difference does the best surgeon in the world make if, post-op, you place the patient into a MRSA-infected room? What difference does the best nurse make if she doesn’t question a medication order for fear of bothering the physician? All members of the team must know and experience their roles and the value that their specific position brings to the patient.

Health care still functions as a hierarchy with a focus on command and control rather, than on the relationships between its different parts. This power gradient will always produce oppression, which is the major factor behind horizontal hostility and vertical aggression. In human groups of unequal power, the dominant group exerts so much pressure downward that the oppressed group cannot direct its power upward—so they unconsciously attack each other. Nurses are responsible for the outcomes (quality and safety), yet have no access to the resources needed to accomplish that goal (staffing ratios).

Medical errors are severely underreported in a fear-based culture. The problem is further entrenched in the general societal culture, where the huge number of harmful incidents and deaths due to preventable error never makes the evening news. If it did, we would have more support from the general public—and therefore, more government funding.

In the broader societal context, patients continue to place unwarranted and unearned trust in their caregivers and hospitals, due to a longstanding belief that when we proclaimed, “Do no harm” a century ago, we actually meant it. How can a system succeed at addressing its inadequacies if it doesn’t have a realistic picture or tally of its own impact and harm? Or if that harm is so deeply embedded in the culture that it doesn’t even register with its own leaders, let alone with consumers? Leaders must seek to understand the culture that they are leading, and use this knowledge to frame decision making.

The current fear-based culture is characterized by bullying behaviors and self-silencing. A health-care worker must know beyond a doubt that he or she will be respected and appreciated for speaking up and owning patient safety. Only education and leadership can debunk the current myths that keep suppressing the information we desperately need to decrease medical errors.

To reduce medical errors from a social science systems perspective, leaders must focus on language and behavior, and accept their pivotal role as stewards of a new, safe, team-based culture that:

Until we create a safe culture, we will never realistically be able to assess the number of medical errors caused by bullying and hostile behaviors. It cannot happen without visionary leaders who poignantly understand that human factors are essential to promoting effective, patient-centered work.

Kathleen Bartholomew is an author and national lecturer specializing in the nursing profession. She quickly realized as a nurse manager that creating a culture of belonging was critical to retention and patient safety. Her newest book, The Dauntless Nurse: Communication Confidence Builder, is available on Amazon.com.

1 G.A. Farrell, “Issues in Nursing Violence in the Workplace” (paper presented at a meeting of the Oregon Chapter of
the American Psychiatric Association Conference, Tualatin, OR, 2005). 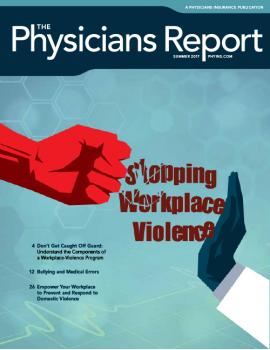