When Everything Is Done Right, Yet Stroke Diagnosis Is Missed

You could do everything right. You could make a judgment that isn't questioned by your peers. You could meet the standard of care. But the patient could still be harmed--and then you could be sued.

In the following case, the names of people and facilities have been modified for privacy protection. Consider how each component affected the diagnostic process and the eventual outcome.

Puzzling Pain
At the time, Carter was a 26-year-old assembly mechanic in manufacturing at Boeing. Her health odyssey began when she experienced neck pain for several days, followed by a headache for 24 hours. On October 12, she went to the urgent-care clinic and was diagnosed with sinusitis and discharged.

But the headache continued for three more days. In fact, it was severe enough to keep her awake at night. On October 15, she visited her primary-care physician. The doctor ordered a CT to rule out a hemorrhage, which was performed later that day at a local hospital. The physician who interpreted the CT saw no acute disease or source at the root of Carter’s problems.

Carter’s headache continued for six more days. On October 21, she saw a chiropractor near her home. She told him she had sharp, shooting pains in her neck when she moved her head, and that her primary-care physician had told her that her headache was probably coming from her neck. Based on her symptoms, the chiropractor diagnosed her with a cervicogenic headache.

He performed a diversified-technique adjustment to her cervical spine. When Carter sat up, she started crying because her head hurt so badly. Then she couldn’t speak clearly for two minutes. 911 was called immediately, but her speech was normal by the time the paramedics arrived. Carter, who had a previous history of anxiety, stated that she must have panicked. She was transported to a local hospital.

No Signs of Stroke
The doctor who evaluated Carter at the hospital suspected dissection and/or stroke, so he initiated an MRI stroke protocol, which is a diagnostic imaging order set. The set was read by Dr. Dalvi. Of the 1,600 images generated, Dr.
Dalvi found no signs of stroke and concluded there was no dissection present. Based on Dr. Dalvi’s findings, the doctor prescribed a migraine cocktail, and Carter was discharged.

Carter returned to the local hospital the next morning, after waking up unable to speak.The doctor who evaluated her discussed her condition with a hospital neurologist, who agreed to see her for an outpatient evaluation.

In the meantime, Carter’s primary-care physician consulted with the neurologist at the local hospital about Carter’s condition. Carter met with the neurologist on October 24 for an urgent neurological evaluation. She now also had weakness and numbness on the left side of her face and in her left leg. He noted that “although symptoms are suggestive of a cortical process, such as a brainstem stroke, her MRI brain stroke protocol was unremarkable.” 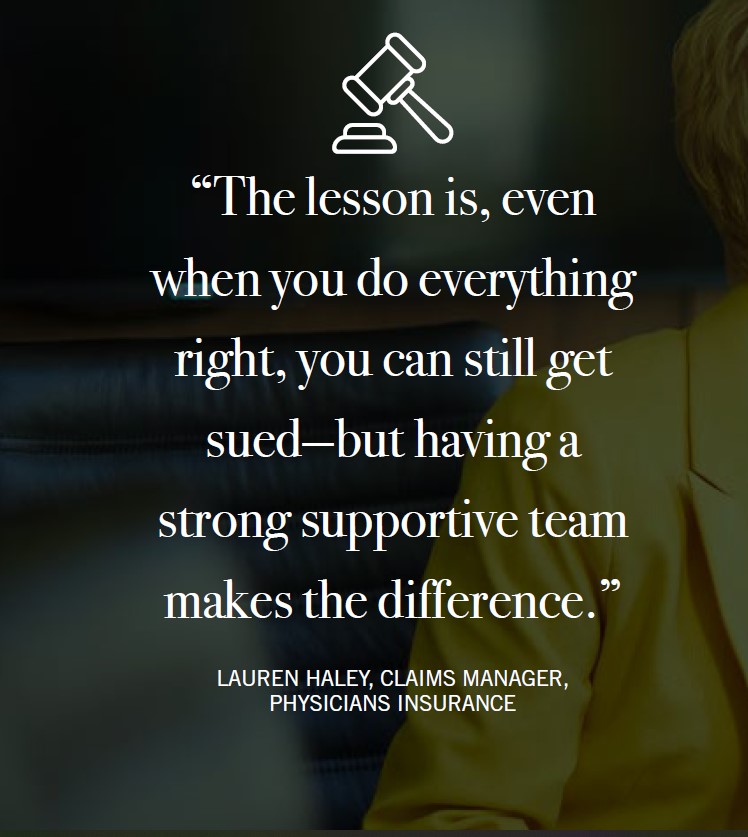 Mental-illness Diagnosis
Later that day, Carter went to the emergency department at a Seattle tertiary-care hospital. She told medical professionals there that she had fallen to the ground after her visit to the neurologist. A neurology consult was ordered, and neurologists there also suspected dissection, but ruled it out because it wasn’t found on the previous radiology reads. Doctors discussed the possibility of anxiety affecting her presentation of symptoms. She was discharged with a diagnosis of a mental health condition.

Rapid Decline
In the evening of October 26, while watching TV at home, Carter started drooling, lost bladder control, and became unresponsive for several minutes. Her husband took her to the emergency department at the local hospital. There was no available on-call neurologist at that time, so she was transferred via ambulance to a Seattle hospital. A repeat head CT was ordered prior to transfer.

Carter was admitted to the Seattle hospital in the early morning of October 27. Later that afternoon, while still in the hospital, Carter was suddenly unable to speak or swallow. She could move her left extremities but nothing on her right side.

She had another CT in the middle of the night, and her symptoms continued to wax and wane. After the CT was read in the early morning hours, the radiologist reported to her doctor “a critical result,” namely, there were bilateral vertebral artery dissections/occlusions in the distal ends at the V-4 segments, as well as a complete occlusion of the basilar artery.

At 6 a.m, Carter was intubated and Code Stroke was initiated. An MRI showed an acute infarct of the pons. The on-call endovascular neurosurgeon decided to perform a cerebral angiogram with acute stroke intervention. Catheter angiography revealed dissection of the bilateral vertebral arteries and occlusive thrombus in the basilar artery. The surgeon removed the blood clot from the basilar artery, with some difficulty.

Following surgery, Carter developed acute respiratory failure and remained in a coma. On October 30, a neurologist noted an improving exam but gave her a poor prognosis. She was taken off the ventilator on November 15, then was discharged to a skilled-nursing facility on December 2 and transferred to inpatient rehab on February 10. She remained there until March 3, when she was finally discharged home. She received rehab services at home until switching to outpatient therapy in April.

She plateaued with occupational and physical therapy in 2016. She now walks slowly with a walker or four-point cane, and has a speech impediment. She was unable to return to work at Boeing. In 2018, she gave birth to her first child, a healthy girl. Her mother and sister help her with housework and
childcare, while her husband works.

Carter sued three hospitals and seven different medical providers, alleging medical negligence and loss of consortium claims against each defendant, including allegations that Dr. Dalvi breached the standard of care by failing to identify dissections.

Lauren Haley, Claims Manager at Physicians Insurance, who worked on Dr. Dalvi’s case, had to decide whether she and Dr. Dalvi would settle as well, or take their chances at trial.

“Of course, when all the other defendants settle, you have to consider doing the same,” Haley says. “Sometimes it does make sense. But we don’t take a seven-figure settlement lightly.”

Once Dr. Dalvi’s defense team got feedback from other experts, they knew his actions were defensible. “He did everything right,” Haley says. “Three different hospitals and seven different doctors didn’t catch it. The reality is, her presentation was atypical, and despite everyone’s best efforts, the medical professionals were unable to identify the root of the problem. Unfortunately, this sometimes happens.”

Still, it was a risky stance. According to Dr. Dalvi’s defense counsel, Miranda Aye, the plaintiffs’ legal representation and expert witnesses were very strong. Additionally, “the plaintiff was very sympathetic at trial,” Aye says. “She was young, with a new baby, and she had worked so hard to recover.”

The plaintiffs’ attorneys tried to argue, using expert testimony, that Dr. Dalvi should have recommended additional imaging. However, defense experts did not identify any findings of dissection on the stroke protocol and found that the standard of care didn’t call for additional imaging.

Strong Support Is Key
The jury agreed with Dr. Dalvi’s defense, and he won the case.

“The lesson is, even when you do everything right, you can still get sued—but having a strong supportive team makes the difference,” Haley says.

And if you do get sued, Aye says, trust your defense team. “Understandably, it’s hard for a doctor to be in the role of ‘patient’ in the hands of other professionals,” she says. “They’re not used to that. But working together as a team is the best way to help us build the strongest defense possible.”

Being sued is always devastating to a doctor, Haley notes. “They’re being told someone suffered because of what they did or didn’t do,” she says. “It leaves a scar.” As evidenced by Dr. Dalvi messaging both Haley and Aye on the one-year anniversary of the verdict to thank them again, it sticks with you—even when it ends as well as it could have.

Closing the Loop on Diagnosis Errors

Diagnosis errors are the most common, most catastrophic and most costly of all medical errors. Diagnostic errors are the top cause of malpractice claims and add billions in unnecessary costs to the healthcare system each year. In this issue of The Physicians Report we'll take a closer look at this and explore some promising solutions and leader best practices to make a difference in diagnostic quality and patient safety.