Sexual Harassment in the #MeToo Era

Since the Harvey Weinstein story broke in October 2017, and in the midst of the #MeToo movement that has arisen in its wake, there’s been a shift in society’s awareness of and tolerance  for harassment—a shift which is, in turn, playing out in the court system.

The U.S. Equal Employment Opportunity Commission (eeoc.gov), the federal agency charged with enforcing laws that prohibit discrimination on the job, reported a 13.6 percent increase in the number of charges of sexual harassment it received in Fiscal Year 2018 over Fiscal Year 2017.

Just as striking, settlements and awards for claims of harassment tended to be higher in Fiscal Year 2018. The EEOC recovered nearly $70 million for victims of sexual harassment through administrative enforcement and litigation in FY 2018, up from $47.5 million in FY 2017.

The rising tide of awareness surrounding sexual harassment  has brought a shift in how  physical contact—of any type— may be perceived.

“I’ve been seeing more that it’s not just employees making claims against other people that they work with—say, medical assistant versus physician— but it’s now also patient versus doctor or patient versus provider,” says Jennifer Smitrovich, an attorney with FAVROS Law, a medical-malpractice defense law firm in Seattle. “People  are stating that a physician touched them inappropriately during an examination or spent too long examining an area, for example.” 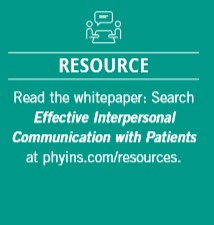 To mitigate the risk that a patient may feel a procedure has crossed the lines of propriety, Smitrovich suggests that physicians invite a second staff member into the room during exams when possible. She also recommends that physicians work to become acutely aware of their personal space and the personal space of their patients, and allow enough clearance that physical contact doesn’t happen unless necessary for an exam.

Smitrovich has seem claims stem from unintentional body contact when no ill intent was meant—simply as the result of a tight examination room.

“I’ve seen complaints made where patients believed that they were improperly touched by a physician who was just trying to get to the other side of the room,” she says.

In another case Smitrovich recalls, a claim was made against a provider that alleged improper touching of a patient’s leg after completing an orthopedic exam of her elbow. “It goes back to training, and awareness that how you touch people matters, even if it’s inadvertent,” she says.

For times when physical touch between providers and patients is necessary—as in the case of an exam—Smitrovich recommends that physicians take the time to fully explain the process to their patient beforehand to lessen the possibility of a complaint.

“It’s important to explain exactly what you’re doing and why,” she says. “Part of it is being mindful of your body and its relation to how you’re conducting the exam, especially when others may have a different perception of the situation.”