What would you do? Legal and ethical considerations in healthcare

Imagine yourself in the role of Dr. Connelly, a primary-care physician in a well-established private practice. One day, a new patient checks in with identification that a staff member deems suspicious. Amid a busy workday, Dr. Connelly asks Kim to wait to discuss the matter later. When the patient checks in, Dr. Connelly learns that Kim has already mobilized other staff members, who agree that the patient should be reported. Dr. Connelly hesitates, unsure of whether she does in fact have a duty to report a patient who is possibly an undocumented citizen. She also wonders whether she’ll be able to effectively care for a patient who may not be telling the truth.

This was the case explored by Jeff Sconyers, JD, a senior lecturer in the University of Washington’s graduate program in Health Services Administration, and Tyler Tate, MD, assistant professor of pediatrics and associate director of The Center for Ethics in Health Care at Oregon Health and Science University, in a recent paper for the American Medical Association’s Journal of Ethics.

The case was fictional, but these types of ethical dilemmas are common in healthcare settings, says Sconyers. When they arise, providers may be caught in a struggle between their presumed legal responsibilities and their ethical or moral obligations.

Increasingly polarized views around immigration and other emerging social issues make these quandaries  especially divisive and emotionally charged. Without thoughtful deliberation, it’s easy to make decisions based on fear instead of clear reasoning. “In my own experience, I have not had an increase or decrease in undocumented patients,” says Tate. “I’ve had a steady rate since 2012. That being said, I do think there is more fear among undocumented patients around getting discovered and reported.”

When healthcare providers face ethical questions—from what to do when a patient presents a false insurance card, to how to end a relationship with a problematic patient—there are a number of legal and ethical factors to consider. Weighing each one can help guide providers toward decisions that are morally, ethically, and legally sound.

CONSIDERATION 1:  WHAT DOES THE LAW SAY?

All healthcare providers need to know what they’re required to do under both federal and state law, says Sconyers. While federal law requires the reporting of child abuse, certain states also mandate reporting of human trafficking of adults and the presence of infectious diseases. Under federal law, elder abuse must be reported in facilities that meet certain conditions, but state laws on elder abuse may vary. Regulations differ by state, so healthcare providers need to be familiar with the laws in states where they practice.

Just as important as knowing what  the law requires of providers is knowing what it does not require. A common misconception, highlighted in Dr. Connelly’s case, is that healthcare providers are required to report patients’ criminal activity. In fact, they are not required to report illegal activity that does not relate to a mandatary reporting requirement.

“Some people think that their primary duty is to report conduct that they think is illegal,” says Sconyers. “It comes up all the time in healthcare settings. For example, somebody presenting an insurance card that’s forged—that’s illegal and may be a crime, but while the provider would have an obligation not to submit a claim based on an illegitimate insurance card, they don’t have an obligation to report the illegal activity.”

With a firm understanding of their legal obligations, providers can devote more of their energy to considering the moral and ethical underpinnings of each situation. “As a healthcare provider, you have a responsibility to learn the rules,” notes Tate. “But we do have ethical duties that are not dependent on what the law might say. The law is codified to secure what we should and shouldn’t do; I’m more interested in thinking about the moral underpinnings of the law.”

When do a physician’s legal or ethical responsibilities outweigh a patient’s right to privacy? Most of the time, when conflicts arise between a patient’s right to privacy and a physician’s responsibility to report illegal conduct, patient privacy wins, says Sconyers. “If, during a physician visit, a finance director says, ‘I’ve been stealing from my employer, can you give me something for the stress?’ the physician would be required to honor the patient’s privacy, not to report the conduct,” he says.

“There is something sacred and binding in a physician-patient relationship that must be respected, but there are times when you have obligations to other people as well,” says Tate. “But it’s case by case. If you find out a patient is a drug user, but isn’t going to die or harm themselves or others, often the right thing to do is to respect the confidentiality of the patient, even though you know the activity is harmful. However, if you discover your patient is hurting someone other than themselves, as with child abuse or elder abuse, you do have a responsibility to talk to law enforcement or notify the appropriate people.”

CONSIDERATION 3: WHAT IS  YOUR DUTY TO THE PATIENT?

Must a physician continue treating a patient who supplies false information, reveals illegal activity, or persists in unethical behavior? Possibly, but not indefinitely, says Sconyers. “If you become aware of a patient’s unethical or illegal conduct and you can’t tolerate it, there are specific procedures for ending that relationship,” he says.  “You can’t abandon a patient in the course of chemotherapy treatment, but at the end of their treatment, you can end the relationship.”

In the AMA case, Dr. Connelly wonders whether she’ll be able to treat a patient who may be hesitant to tell the truth. When trust between a patient and a provider is damaged beyond repair, or can’t be established at the outset of a relationship, allowing the patient to find another doctor may be the most caring course of action.

“In my opinion, if you’re acting because you care about the patient—rather than about profit or out of fear, for example—that’s a morally sound approach,” says Tate.

A factor complicating Dr. Connelly’s case is one that’s familiar to many physicians: Without enough time for thoughtful reflection, important ethical, moral, and legal decisions may be rushed. “In his book Thinking, Fast and Slow, Daniel Kahneman has a thesis that That’s easier said than done. Burgeoning patient panels, brief appointments, language barriers, and the increasing demands of electronic medical records can get in the way of sound decision-making, leading to potential moral and ethical blunders. “Those are not the kind of conditions that thoughtful interactions and facilitate getting into that second mode of thinking,” says Tate. “This contributes to physician burnout, which in my mind is an ethical problem. All of the extra things physicians are being asked to do detract from their ability to think clearly about these issues, which is a moral problem.”

When faced with a moral, ethical, or legal question, taking time for reflection is vital—and healthcare providers shouldn’t confuse thinking and deliberation with inaction, notes Tate. “From a moral perspective, not acting is acting,” he says. “Thinking is action, deliberation is action. It’s a movement, a stance, and a way of approaching a situation.”

CONSIDERATION 5:  ARE YOUR POLICIES AND PROCEDURES IN ORDER?

Without clear legal and ethical guidance outlined in writing, costly mistakes can consume precious time and resources. “There’s a lot of harm that could come to your patient or your practice, whether you breach HIPAA and get sued, or bill Medicare with false information,” says Tate. Consulting the office manual about how to handle patient misconduct, falsified insurance information, and other problems gives physicians and staff time to pause and reflect instead of acting immediately.

“When an ethical issue comes up, physicians can make things a lot easier for themselves if they can point to policies and procedures already in place,” says Sconyers. “There are good sample policies from the AMA or state medical associations on how to handle things like patient privacy, security of files, office records, and termination of employees.”

But even the most thorough set of procedures needs to be updated regularly, as laws and policies change. “With ethics, as with anything else, it’s hard to keep up,” notes Sconyers. “Almost all providers have access to ongoing education, and many organizations include ethical issues in their CME. The AMA produces a short article on an ethics topic every week.”

As for the question posed by  Dr. Connelly’s dilemma, don’t be too quick to assign blame. “While nurse Kim was more suspicious and inflammatory in her response to the patient, it’s difficult to assign moral wrongdoing in a case like this,” says Tate. “Everyone in the clinic was probably trying to do the best they could on a busy and stressful day.  The problems highlighted here are  also about the obstacles physicians face, in not having the time and  space to think clearly.”

When providers reflect on each situation and access their own internal moral compass, they’ll be better equipped to manage the delicate balance between their legal, ethical, and moral responsibilities. “Of course, rules are important,” says Tate. “Yet we also cannot afford to be a slave to rules, policies, and procedures, as that can totally suffocate compassion." 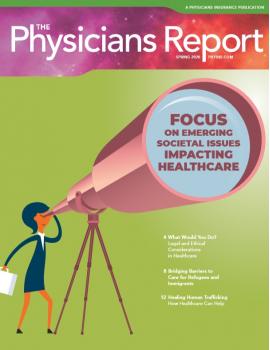